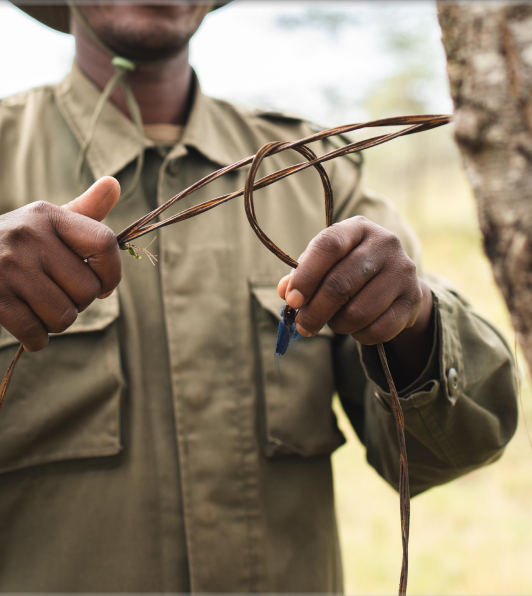 Poaching is sadly still a big issue in Tanzania, as well as many other countries in Africa. Serengeti’s De-Snaring Programme was started back in April 2017 which we helped found along with TANAPA (Tanzania Parks), Frankfurt Zoological Society and a few other conservation NGOs. This programme is set up to patrol the Serengeti National Park of poachers who are setting snares to capture animals. The majority of animals that are caught for bush meat and their hides, are Wildebeest and Zebra. The patrols that are scouting the lands, are scouting for poacher camps and the set snares. Poachers typically set up a camp somewhere within the park, where they dry the poached meat before transporting it illegally out of the park.

The patrol teams have gone from one team back in 2017, to the current three full-time patrol teams that they have in action now. Each patrol team is made up of a combination of TANAPA field rangers and community members who are ex-poachers – this is to provide the knowledge of bush meat poaching to improve efficiency when out on patrol. Each team does an average of 60 patrol days per month and are removing more ‘new’ or unsuccessful snares nowadays than old or successful snares.

The teams have released over 1,170 animals over the last 5 years and have removed 74,000 snares from the park. All meat that is found in a poacher camp or being smuggled out of the park is burnt so it is out of circulation completely.

Every bed night our clients stay in the Serengeti National Park, $1 goes towards this de-snaring project per person. This money goes directly to the programme, that is mainly carried out by SENAPA (Serengeti National Park) and Frankfurt Zoological Society, who provides all logistical and material support using donations from the private sector in Tanzania, overseas private donors and conservation NGOs.

All images have come from Frankfurt Zoological Society and TANAPA.