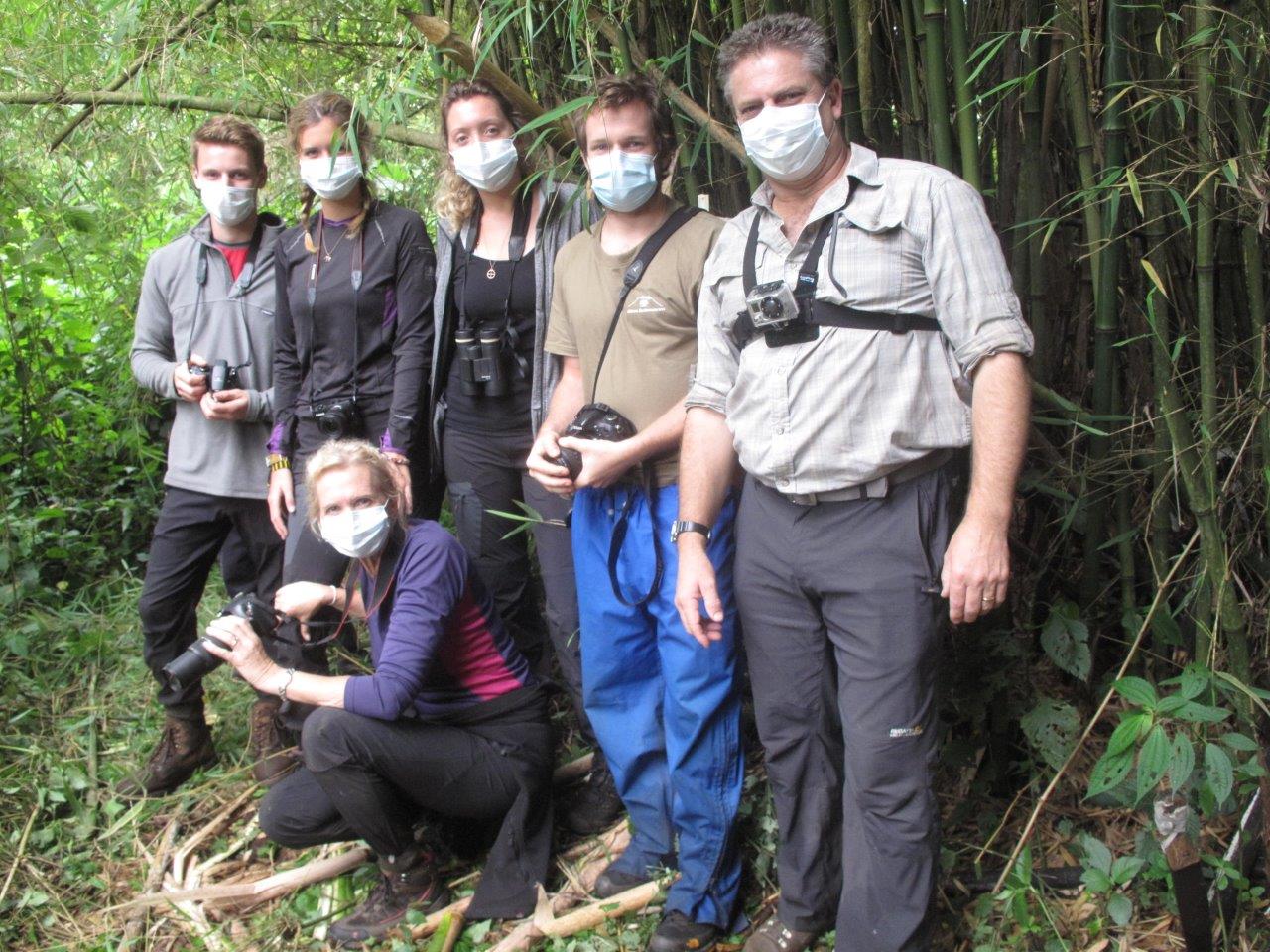 Landing in Kigali the capital of Rwanda the first thing that strikes you is the amazing road network and that it’s built up and down over a series of steep hills – the whole town is being overhauled and rebuilt. Everywhere you look new shiny buildings are shooting up and our guide proudly points out another area of shanty town that is poised for demolition and a mile of so further on hundreds of new homes being built. Driving on through Rwanda’s hilly country side as the road climbs and dives the next few things to strike you are the absence of any litter – plastic bags are banned and each month there is a national clear up day when EVERYONE goes outside the tidy up! – and then there is the trees! Rwanda is known as the land of a thousand hills but should be renamed the land of 10 million eucalyptus trees!

A few hours later we arrived at the crossing to the Democratic Republic of the Congo at Goma on the shores of Lake Kivu …. After crossing the border in some ways it felt more like the ‘real’ Africa rather than the Rwandan sanitized version – hectic, loud, colorful and brash! We had an armed park ranger in the car with us as we headed off into the bush to our lodge – it’s not that long since rebels roamed the area and the Park doesn’t want to take any chances. The road wasn’t great but bumpy roads do add character to a trip!

Mikeno Lodge is located at the Virunga park HQ, the park buildings are mostly older and looking a little sad but the rangers and staff are smart and have a definite spring in their step and clearly a pride in their work. The lodge itself is wonderful! …set on a slop with views through the canopy to the plains below its comfortable without being gaudy. The bungalows a huge, each with a fireplace (it does get cool and night) private terrace and large bathroom – they are also well spread out in the forest and we couldn’t see the neighbors.  As we arrive a troop of black and white colobus monkey were leaping and playing above our veranda.

An hour’s drive in an open sided safari vehicle bought us to the ranger station at the start of the Gorilla trek ….. After a briefing about the various groups in the forest we set off into the thick jungle like forest. The trails was clear and we hiked steadily upwards for an hour and a half before meeting another ranger on the track. He had set off before dawn to find the gorilla family and had then cut a small track back to meet us. Rather excited we donned our face masks so we didn’t transmit any infections and headed into the thick bush. As we walked in we headed a series of quick pops …puzzled we asked our guide to be told it was one of the silverbacks beating its chest …. Its sounds absolutely nothing like the Jonny Weissmuller / Tarzan sounds that I was expecting.

Finally we saw the branches ahead bucking and swaying as the gorillas clambered up and down and we crept on – cameras at the ready!

Watching the troop forage and play is fascinating – you are only allowed one hour with the troop which I had through would be too short but it’s such an intense experience it’s about perfect. We followed then through the jungle as they drifted from tasty plant to tasty plant – seeming to have a real liking for bamboo in particular. At one point on the silverbacks ended up behind us and we had to jump out of the path – he had no doubt that HE was the boss and casually knocked the rangers foot out from under him as he went by.

All too soon the hour was up and we headed back to a tented camp near the ranger post for the night.

Next day we hiked up to see the gorillas again – we chose to go and see the same troop as we were starting to figure out the individuals and their characters. The second day was even more amazing, they were more stationary having found a couple of huge clumps of bamboo and we found ourselves in the middle of the group – cameras point out in every direction. Again the same silverback had to put us in our place – marching up and causing us to shirk away as he ripped into the bamboo behind us ….there was plenty of other bamboo but he decided he wanted the bit behind us just to prove he could. Another time one of the youngsters got curious and came over to see us – the ranger fended him off with a branch as contact is forbidden … so the youngster had to content himself with putting on a dance show for us with pirouettes and somersaults. Unforgettable moments ….. 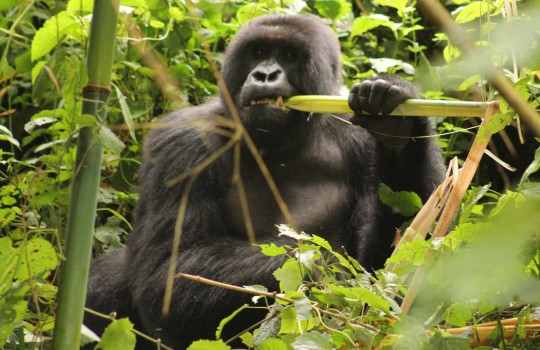