The Western Breach route on Kilimanjaro is the most stunning, most direct and least scree covered ascent route on the mountain.  It is the only ascent that takes you directly onto the crater floor, next to what little still remains of the beautiful glacial ice, and positions you for the shortest and easiest possible ascent to the inner crater and a look into the ash pit.  It is the only practical way to traverse the mountain, not re-tracing a single step of the ascent route as you descend via the Mweka route.

I first climbed the Western Breach in 1983 and have done over a hundred ascents with many hundreds of trekkers.  No 19,000 foot mountain anywhere in the world can be completely void of rock fall danger and there have been rock fall accidents everywhere on Kili.  Rock will continue to fall until Mother Nature finally wears the mountain down to a large flat plain.  As climbing leaders we need to draw on our years of experience mountain climbing worldwide to evaluate the potential dangers and make changes when necessary insuring our number one priority is to always climb out of harm’s way.  The biggest concern I have, and anyone signing up to climb the Western Breach should have, is how experienced is the guiding team that will be leading you.  The route is not technical but there is safe climbing protocol and a very protected “line of ascent”.  To reduce risk as much as possible you have to climb with leaders who have years of experience on the Western Breach and the leadership skills to keep the whole team on track and on schedule.

Although African Environments are in full support of the Western Breach, we understand there are risks involved and we are constantly re-evaluating the route.   In September 2015 three African Environments Guides took part in a reconnaissance mission, after rock fall occurred and a life unfortunately had been lost, (Note: Not a client of African Environments, in fact we were not on the Western Breach at the time). Our Guides, along with the Kilimanjaro Rangers formed a small group to assess how this rock fall occurred and carefully re-evaluate the  ‘safe zone’s’ and the climbing protocol.

The reconnaissance team once again reiterates the importance of following the African Environments guide lines;  depart Arrow Camp before 5.30am, in order to get past the zone that could be affected by rock fall as the sun’s rays arrive and stick with your leaders for the safest ascent route.

The team also recommended that Kilimanjaro National Park put signs in place that will provide advice and warnings about going off route.

We will soon be finished climbing Kili for this season, closing for the wet season when the monsoon rains make it pretty unpleasant and unpredictable to be climbing. From December we will be back on the mountain climbing through our favorite route – Ultimate Kilimanjaro!

Wesley Krause is the founder and Director of African Environments. He is a passionate outdoor leader and trainer. 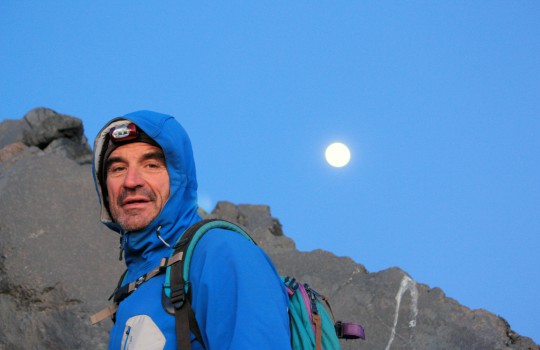